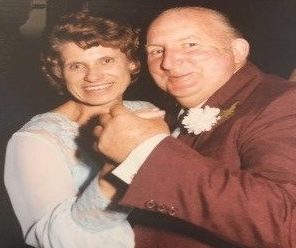 Southhaven/Riverside resident Norm has a deep passion and love of his family. Norm was born in the 1920s in Lewisham Hospital.

Growing up as the middle child, Norm grew up in the Mortdale area and loved playing sport including cricket, tennis, football and swimming.

After leaving school, Norm studied and became a cabinet maker, then changed career to work for the Railways repairing trains at Cooks River Goods Yard until he retired in 1989.

He still wears his gold watch proudly every day that he received from the railway on his retirement 30 years ago.

Sometimes he was the host and MC at Mortdale dance hall on Saturday nights.

This is where he met Norma the love of his life. They married two years later at at Penshurst.

Norma and Norm had two daughters. The family resolved to use public transport for years after Norm sold his near new Austin car for a deposit to buy their new house in Panania. Norm still owns that house 63 years later.

Norm eventually got another car – a Ford beauty with pink seats. It was an amazing gangster-look car however with a few incidents: the front passenger wheel fell off when Norm was driving; another time back door fell off also while driving; and another time Norm stepped on the brake pedal and his foot went through the car to the ground!!

After that Ford, Norm went on to have a Holden, another Ford and the last car he owned was a brand new Magna. Norm has always been a supporter for the St George Illawarra football team. He often went to watch their games.Norm is a hardworking family man who worked three jobs seven days a week for many years to provide for his family, so that Norma could stay at home to care for their girls. He worked for Railways, had a detergent run and was an ice cream man.

Norm loved his holidays. He had visited NZ, USA, Hawaii and New Caledonia, enjoyed cruises, and toured Australia. Norm loved going on family trips and attending family functions. He loved his pet dogs, cats and budgies and spoiled them with treats. Norm enjoyed babysitting his grandchildren and is a great cook making wonderful sandwiches for afternoon tea and cooking great dinners.

Norm helped with their homework (his favourite subject is anything to do with maths), took the grandchildren to their sporting activities, on outings or a drive.

Norm loves every minute he spends with his grandchildren and great grandchildren. Norm loves his family unconditionally. His beloved wife Norma passed away suddenly in September 2000, leaving huge void in Norm’s life.

Norm is loved by his daughters, five grandchildren and 7 great grandchildren. Norm loves to hear about their adventures, seeing photos and their visits.

Norm lived at home at Panania till the age of 89 when ill health struck that he had stayed in hospital for three months. On his 90th birthday, he moved into Riverside of Southhaven.

As Norm’s two daughters told his life story, Norm, although very frail at age of 94, has had input on all aspects of his story.

This has been a very special time for Norm and his two daughters reliving the wonderful life of their amazing father. A beautiful journey of love, laughter and at times tears. To walk down memory lane, it has been so special realising their Father is a hardworking family man who loves his family unconditionally.

Dianne and Kerrie, we hope you have enjoyed reading this remarkable story of Norman Messer, their beautiful Father.