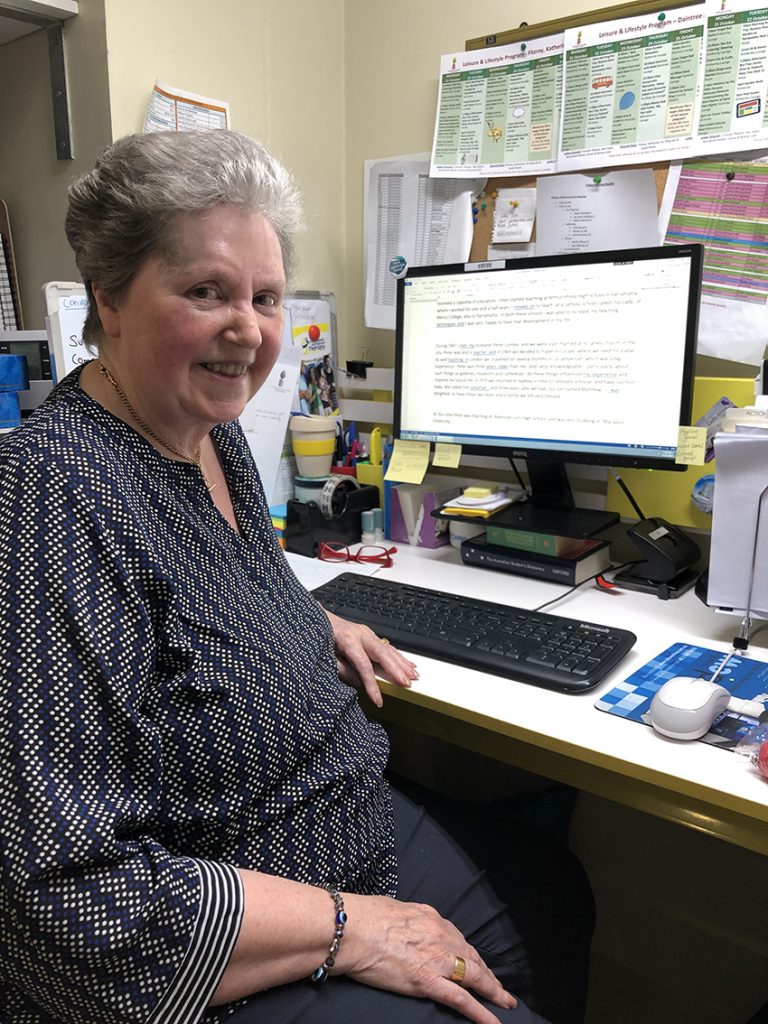 I was born in Johannesburg in the 1940s. I was the third daughter in my family with two older sisters. I was fortunate to have a happy childhood and an excellent education. I loved school and enjoyed life both at school and at home. After matriculating, I went to university, where I studied English Literature, Anthropology and History of Art.At that time in South Africa, the apartheid laws were very harsh and my parents were very much opposed to the situation. In 1966, my father was ‘head hunted’ to a lectureship at the University of New South Wales, and as a result we were very happy to leave South Africa as a family.

I furthered my studies at Sydney University, where I obtained a Teachers Scholarship, and in mid 1960s I received a Diploma of Education. I then started teaching at Arthur Phillip High School in Parramatta, where I worked for one and a half years. I moved on to teach at a catholic school called Our Lady of Mercy College, also in Parramatta. In both these schools I was able to increase my teaching techniques and I was very happy to have that development in my life.

During the late 1960s, I met my husband Peter Lumley, and we were soon married at St James Church in the city. Peter was also a teacher and in 1969 we decided to travel in Europe, where we lived for a year. As well teaching in London we travelled for several months in a camper-van, which was a big experience. Peter was three years older than me, and very knowledgeable, particularly about such things as galleries, museums and cathedrals. All these things inﬂuenced my experience and inspired my future life. In 1970, we returned to Sydney in time to renovate a house, and have our ﬁrst baby. We called him Jonathan, and three years later we had our son named Matthew. I was delighted to have these two boys, and as a family we felt very blessed.

At this time, Peter was teaching at Riverside Girls High School, and was also studying at Macquarie University. As well as looking after my family, I started a part time position at TAFE so as you can imagine we were very busy. However, I loved the work and after several years completed a Master’s degree at New England University by correspondence. I studied medieval literature specialising in works by Chaucer. Peter and I and the two boys grew in many ways as several years went on.
Sadly, in 1990 Peter became ill and was diagnosed with cancer. After two years of struggle he died, and I was devastated to think of myself as a widow. By that time, Jonathan was working and Matthew was still at school. We were all very sad.

At that time, I had been promoted to be the head of the Visual Arts department at Ravenswood School in Gordon and was fortunate to have a team of gifted and talented colleagues. I worked at Ravenswood for nineteen years. This was the start of a new chapter in my life. One of these teachers introduced me to Robert Rowe, and this was the beginning of a wonderful romance. Robert and I were married in 1995 at St Giles Church in Greenwich, where I have been a parishioner for many years.

Robert and I spent many happy times from then on. We went on many good trips in our motorhome, exploring Tasmania, Brisbane, Melbourne, Broken Hill, Long Reach, plus lots of many times up and down the East coast. I said I would look after the food as long as he did absolutely everything else, including the driving! We worked out good routines between us in this way, and saw plenty of Australia. I retired from full time work when I turned ﬁfty years old, and changed direction to teach English to migrant people at Crow’s Nest Community Centre. I also ran a multicultural group, which we called ‘Handy Friends’. We arranged weekly outings in the city and beyond, for example the Museum, the Rocks area, St. Mary’s Cathedral and even to the Nan Tien Temple near Wollongong. I was also working twice a week at Sydney University teaching adults History of Art, and this was most enjoyable. I worked in this way for nine more years. My long career as a teacher lasted for forty years altogether in various places. It was always challenging and exciting and I am very proud of this achievement.

Later on, Robert and I moved into a retirement village called Willandra Village in Macquarie Park and had several pleasant years there. We also spent some visits to Fassifern where Robert had a property – his children Emma and Nigel still live there. In 2013, Robert had a nasty fall and ended up in Ryde Hospital. He then went to Ashburn House to the section called Kimberley. Later when I broke my arm, it soon became obvious that I could not live alone and I also came to Ashburn House, and I still live here.

Robert died peacefully in November last year at the age of eighty seven. I am now a widow for the second time, and am now seventy ﬁve years old. However I have many faithful friends and lots of support from my family. My beloved sister Mary Ruth looks after me on Thursdays and my two delightful nieces Elizabeth and Ann Margaret visit me every single Sunday. I am very blessed with my family. My son Jonathan lives in Newcastle, and Matthew lives in Wollongong, so they come to see me whenever they can. I wish they were closer but at least I am half way between them here in Sydney.

My life here in Ashburn House is very pleasant, as I enjoy concerts, movies, bus trips, Italian classes, and exercise classes, Bingo, Scrabble and Rummikub on Saturdays. I listen to music and read widely – in fact reading is my main hobby. The nurses are wonderful and the leadership is excellent. I have now lived here at Ashburn for three years, and feel very happy to be here.